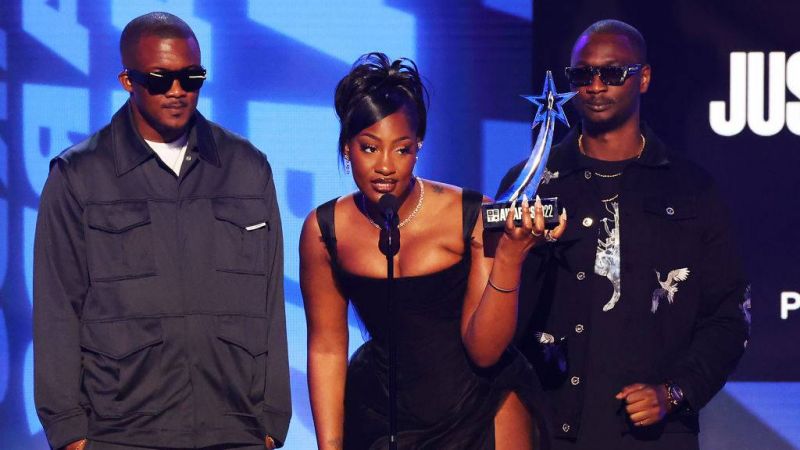 Silk Sonic, Kendrick Lamar and Tems were the top winners at the 2022 BET Awards, which were presented Sunday (June 26) at Microsoft Theater in Los Angeles.

Each won two awards. Silk Sonic took album of the year for An Evening With Silk Sonic and best group for the second year in a row. In addition, the duo’s Anderson .Paak was named video director of the year.

Lamar won best male hip-hop artist for a record fifth time. He had shared the record for most wins in the category with Drake with four wins each. Lamar also took video of the year for “Family Ties,” a collab with his cousin, Baby Keem.

The three artists who amassed the most nominations, Doja Cat (with six nods) and Ari Lennox and Drake (with four nods each), were shut out in terms of awards.

The award for “Essence” is Bieber’s first BET Award. He was nominated 12 years ago for best new artist and a “fandemonium” award.

This is the third year in a row that the award for best female R&B/pop artist has gone to a first-time category champ. Lizzo and H.E.R. won the last two years. Just before that, three women – Beyoncé, Alicia Keys and Rihanna – had a lock on the award for 13 consecutive years (2007-19).

To win best male R&B/pop artist, The Weeknd topped Chris Brown, a six-time winner in the category, among others. The Weeknd wasn’t present to accept his award.

Latto became the second female rapper to win the BET Award for best new artist. Nicki Minaj was the first 12 years ago. Minaj went on to receive a Grammy nomination for best new artist – a feat Latto is likely to match later this year when the nominations for the 65th annual Grammy Awards are announced.

Megan Thee Stallion won best female hip-hop artist for the third year in a row, the longest winning streak in that category since Minaj won seven years running from 2010-16.

Album of the year – An Evening With Silk Sonic, Silk Sonic

Video director of the year – Anderson .Paak a.k.a. Director .Paak