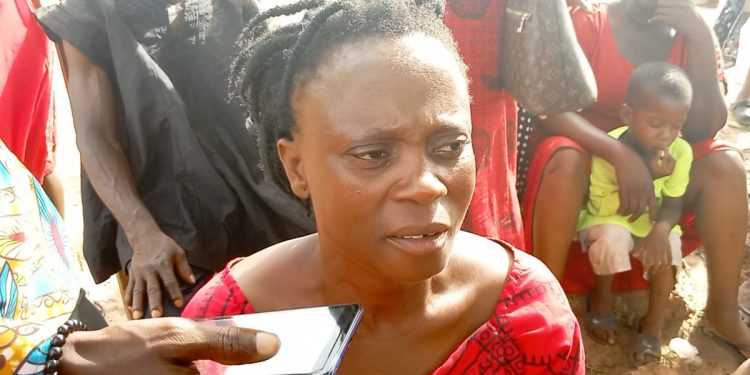 The Mother of the 19-year-old student of Nkoransa Technical Institute, Victor Kwadwo Owusu, who died after police clashed with residents of Nkoranza says the death of his son has left her in a state of despair.

She wants justice because she is reeling under the pain of his son’s demise.

“I am devastated over the development. The news came to me as a shock”, the mother, Yaa Kwaa told Citi News.

On Tuesday, the youth of Nkoranza in the Bono East Region clashed with police in the community over the death of an alleged robbery suspect, Albert Donkor.

The rampaging youth gathered as a result of the press statement released by the Ghana Police Service on Tuesday, concerning the death of the suspect, also a 27-year-old businessman

The youth burnt car tyres on the streets of Nkoranza to register their displeasure, as the police later fired several warning shots to disperse them.

But the incident led to the death of the student.

“Why should he be killed when he has committed no crime? He was just three months away from completing school. Authorities should ensure that justice is served. I have lost my all. This killing is heart-wrenching. My son was calm”, she stressed.

Two more injuries have been recorded bringing the total number of casualties to eight. Two persons have been discharged while five are still receiving treatment.

The youth of the area are alleging that Albert Donkor was killed by some police officers who picked him from his home into a private vehicle after the deceased raised alarm that he had seen an officer involved in a robbery operation.

Meanwhile, the MP Nkoranza South, Emmanuel Agyekum says steps are being taken to bring the situation under control by ensuring that justice is served.

Speaking on Eyewitness News, he demanded an independent probe into the circumstances leading to the death of the two residents.

“The youth were just seeking justice for Albert and unfortunately Victor has become the second victim We should use legal means to get justice for those who have lost their lives. We want the truth to come out.”