Home » Cryptocrash: ‘I was arrested for knocking on Luna boss’s door’ 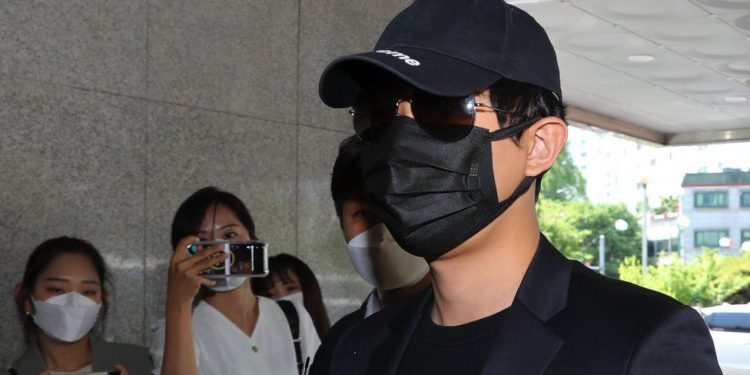 The sudden collapse of two popular digital coins in early May shocked investors and wiped $400bn (£318bn) from the value of many other cryptocurrencies, including the biggest, Bitcoin. All over the world, people who lost their life savings are now appealing for help. One desperate man was even arrested after visiting the home of the elusive businessman at the centre of the “cryptocrash”. He told BBC News his life was in tatters.

In the volatile world of cryptocurrencies, fortunes can be made and lost rapidly – but the May 2022 cryptocrash has been particularly devastating for one man in South Korea.

“I felt like I was going to die,” the cryptocurrency streamer known as Chancers says. “I lost a lot of money in a short period of time. Around $2.4m (£1.9m) of my cryptocurrency was wiped out.”

Chancers has been investing in cryptocurrencies since 2017, and says he became wealthy in the past five years as the value of Bitcoin and other digital coins rose.

“Here in Korea I was in the top 1% in terms of my finances. But thanks to the crash, I’m now in trouble,” he told BBC News.

Chancers invested $800,000 of his money in a digital token called Terra Luna at the worst possible time.

Terra Luna came to prominence in December 2021, when the value of each coin started rising – from $5 to a high of $116 in April this year.

Like many people, Chancers made a big bet on the coin rising further.

TerraUSD is a so-called “stablecoin” a cryptocurrency token supposed to avoid major fluctuations in value. The companies behind stablecoins try to ensure they remain in parity with assets such as the US dollar – with one token equalling $1, for example.

The rest of the cryptocurrency world watched the implosion in horror and pulled billions of dollars out of other digital currencies.

At the centre of the chaos is Do Kwon, a notoriously news-media shy man who invented the Terra system both coins were built on.

Thousands of people turned to the 30-year-old on social media, looking for answers and for a plan to rescue the situation.

But in his desperation Chancers decided to go a step further.

Angry with the lack of communication from Mr Kwon, he searched online and found the crypto millionaire’s home address in Seoul.

“I wanted to ask him about his plans for Luna. I suffered a huge loss and wanted to talk to him directly,” Chancers says.

So the streamer travelled across his home city and knocked on Mr Kwon’s door.

He also decided to share the potential confrontation with his viewers and streamed the event to about 100 people watching his online AfreecaTV channel.

He was disappointed when Mr Kwon’s wife answered the door and she said her husband was out.

Worse was to come, as the police were alerted and he was arrested.

“I surrendered myself to the police station twice,” Chancers says. “I didn’t trespass on Do Kwon’s property – but according to Korean law, it’s illegal to just go there and try to talk. I didn’t know.”

Chancers says he will most likely face a fine and a criminal record that could make his life difficult.

“It’s so hard,” he says. “I lost a lot of money and now I’m being investigated by the police. I originally served as a civil servant in Korea – but if I am convicted of this case, I may not be able to return to the civil service again.

“In Korean culture, the problem itself is not important but rather the fact that it caused a scandal. I even had to apologise publicly as a sinner. I had no idea this would be so big. It’s very sad.”

Chancers regrets trying to speak directly to Mr Kwon but says cryptocurrency bosses are not being held accountable for failed projects that affect so many people.

Nearly 250,000 people had invested in the Terra coins, it is estimated.

Chancers accuses Mr Kwon of not communicating publicly enough during and since the collapse of the coins. He now describes them as a “scam”.

Mr Kwon says neither he nor his company has made any money from the collapse of the Terra coins.

On Friday, South Korean police said they were investigating his business, Terraform Labs, with local news outlets reporting the Financial and Securities Crime Joint Investigation Team was focusing on the coins’ downfall.

Before starting Terra, in 2020, Mr Kwon was reportedly behind another failed cryptocurrency coin, Basis Cash.

A week before Terra’s demise, he told a YouTube crypto channel: “95% [of coins] are going to die – but there’s also entertainment in watching companies die too.”

Just before his $60bn creation began to implode, he tweeted to his nearly one million followers on Twitter: “I love chaos.”

Over the next three days, in a flurry of tweets, he launched plan after plan to rescue the coins, urging the Terra community to “hang tight” and “stay strong”.

But on 13 May, he conceded the rescue had failed, tweeting: “I am heartbroken about the pain my invention has brought on all of you.”

But prominent figures in the cryptocurrency community have criticised his approach.

Billy Markus, co-founder of popular cryptocurrency Dogecoin, was also scathing, tweeting: “My recommendation is to stop trying to bring in new victims to fund the previous victims and leave the space forever.”

Neither Mr Kwon nor Terraform Labs responded to requests for comment.