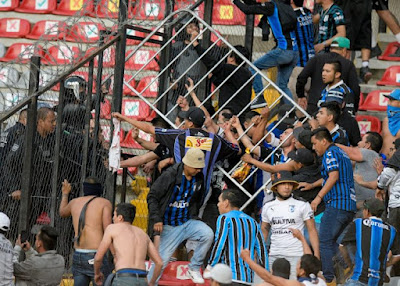 At least 26 people were injured when violence broke out among the crowd at a top-flight match in Mexico.

The Liga MX encounter between Queretaro and Atlas was abandoned after 63 minutes when fighting spilled on to the field at La Corregidora stadium.

Some players attempted to calm fans down before they were sent to the locker room.

Three people were seriously injured, with 26 supporters in total taken to hospital.

“Even though there are no deaths, we cannot say this is not a tragedy,” said Queretaro state governor Mauricio Kuri on Sunday.

He added that, of the 26 people taken to hospital, three have been discharged but “three are in a serious condition, 10 are in a delicate state and the other 10 are not serious”.

Visitors Atlas led 1-0 when the match was suspended.

Liga MX president Mikel Arriola said all Sunday’s matches have been suspended “in solidarity with the people affected”.

“Those responsible for the lack of the security at the stadium will be exemplarily punished,” he wrote on Twitter.

“The safety of our players and fans is priority!”

In a statement, world football’s governing body added that it was: “Encouraging the local authorities to bring swift justice to those responsible. Our thoughts are with all those who suffered its consequences.”