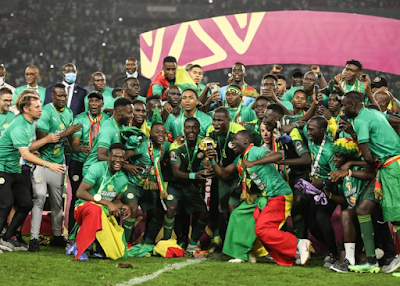 Written by Amenorhu kwaku
Senegalese President Maki Sal announced Monday over the weekend the celebrations of the first victory of the Africa Cup of Nations on Sunday.

Sal, who will travel to Comoros as part of the presidential visit, canceled a trip to welcome the Lions winner to Dakar on Monday.

Senegal star Sadio Mane scored the winning goal in a tight game to make Senegal 4-2 in 120 minutes without a game.

Senegalese state television RTS, quoting the presidential administration in a statement, said: “The lion will be raised by President Sal on Tuesday at the presidential palace in Dakar. “The President of the United States declared a paid holiday on Monday following the incredible victory of the Lions.”

Senegal will face Egypt again in the doubles of the World Cup qualifiers to advance to the Qatar World Cup final.