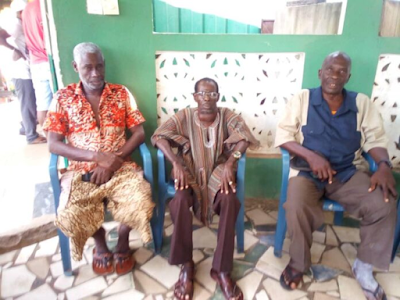 Eight pineapple-growing communities in the Nsawam-Adoagyiri Municipality of the Eastern Region have appealed to the IGP, Dr Akuffo Dampare to provide them with police protection against activities of land-guards and some estate developers in the area.

They have also called on the Minister of Lands and Natural Resources, and the Land Commission to provide some support in the move, to protect the land for farming ventures.

The communities made the appeal in an interview with the Ghana News Agency at Fotobi after a meeting to decide on what action they could take to prevent the activities of the land-guards and the estate developers who were destroying their farmlands.

Abusuapaning Kwame Obuba, who spoke on behalf of the people, said their lives were at risk as the land-guards and the estate developers threatened them with guns and other dangerous weapons.

“I will like to state categorically that these estate developers and the land-guards don’t own lands in this area. The land belongs to the people, which is a family land of 1,783 acres, stretching from Mpakadan to Fotobi since the year 1660,” he stated.

Abusuapaning Kwame Obuba, also the Aduana Abrade Abusuapaning of Aburi Akuapem said the land-guards had taken over hectares of land and handed over to a developer called, who had destroyed a number of pineapple farms and other foodstuffs belonging to the farmers.

He said the situation was alarming because the farmers could not go to their farms to harvest their produce in view of the insecurity created by the land-guards and it was affecting their livelihood, hence their plea to the IGP for the provision of police presence in the area to protect their lives and property.