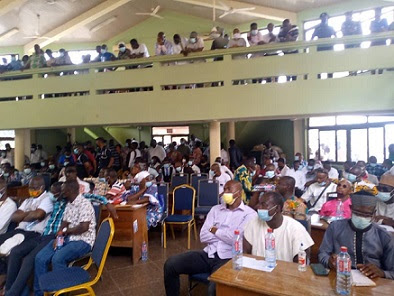 Written by Amenorhu kwaku
The Oguaa Traditional Council, at the second edition of the Osabarima Royal Awards, has honoured outstanding institutions and distinguished personalities who had contributed to the development of Cape Coast.

The awards, held in partnership with the Ridge Royal Hotel, rewarded businesses, institutions and personalities for their excellent performance.

Categorized into 14 with a total of 46 personalities and institutions, the award was opened to only individuals residing and working in Cape Coast or who are indigenes of the town.

The most impactful in community is Wesley Methodist Cathedral and the most influential religious leader went to Right Reverend Richardson Aboagye Andam of the Methodist Church.

Addressing the gathering prior to the awards, Osabarima Kwesi Atta II, Omanhen of Oguaa Traditional Area, asked all citizens to make meaningful contributions to the development of the city of history.

He hinted of plans to expand the categories to cover areas including sanitation to rid the Metropolis of filth.

“We are working to include community sanitation challenge to beef up efforts in promoting good sanitation practices among the citizenry,” he said.