Home » NGO to promote tourism in Ghana launched in Takoradi 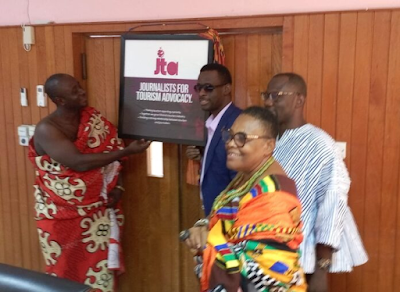 Journalists for Tourism Advocacy (JTA), a Non- Governmental Organization (NGO), which aims at assisting journalists to develop an interest in reporting on tourism matters to drive tourism growth in the country has been launched in Takoradi in the Western Region.

JTA will be the anchor to shoulder research works, statistics, data collection, scientific information management and delivery about the tourism sector in the country.

Speaking at the launch, Western Regional Minister, Mr Kwabena Okyere Darko-Mensah, noted that tourism was one of the few sectors of the country that was sustainable and pledged support for the organization.

He lauded the initiative and said journalists could use their power to position the tourism brand of the country and put it on a higher pedestal adding, “since national development requires the collective effort of all citizens, initiatives of this nature should be supported and encouraged in the country.”

The Regional Minister reiterated the resolve of making the Western Region the number one tourism destination of the country thereby outrunning the Central Region as the number one and expressed the hope that journalists in the Region would be active members of the Association and participate in their programmes and activities.

“For Western Region journalists, this is your baby, you should make sure you are active in reporting the good about the Region. This is one of the good things to come from the West,” he emphasized.

Mr Darko-Mensah pledged his support to the group whilst confirming the partnership that would exist between his administration and the civil society organization to achieve the intended goal of enhancing tourism performance in the Region and across the country.

Madam Aya Baidoo, a Principal Administration Officer of the Ghana Tourism Authority (GTA) in the Western Region, who delivered a speech on behalf of the Regional Director, Mr George Nkrumah Ansere, said when journalists report on tourism, it would help market the tourism potentials of the Region to the international community.

She appealed to media practitioners to improve their understanding and knowledge of the tourism industry and its performance indicators and challenged them to constantly fish for accurate information from the right quarters in order to report with facts and figures.

She called on members of the group and other journalists to liaise with stakeholders to be provided with ample knowledge, skills and information about the Region as far as tourism was concerned.

She implored members of the JTA to concentrate on showcasing the many tourism potentials the Region has while consistently promoting the message and the products in the face of the Ghanaian and international market as they take a keen interest in generating story ideas for Tourism Reporting to expose the potentials of the Regions.

“Together, we can do it. At the end of the day, the JTA would empower Journalists to understand the fundamentals and dynamics of the tourism industry. They would be empowered with adequate information to remain active, reactive, proactive and productive as far as reporting on tourism is concerned”, he stressed.

According to him, there were so many growing fortunes of tourism, which journalists could leverage to promote national development and urged journalists to work in tandem with the relevant institutions to promote tourism in the Western Region.

Nana Akosua Gyamfiaba II, Queen Mother of Nyankrom, who has been instrumental in the establishment of the Christmas tourism package in her traditional area, Nyankrom Bronya, to serve as the homecoming platform for all natives of her traditional area also spoke about the numerous benefits of tourism and how it united and brought joy to the people.

She stressed the need for the journalists to continuously talk and write about the tourism potentials to whip up interest from the younger generation adding, “with tourism, we can regain our lost identity.”

Nana Agya Kwamena XI, Chief of Apramdo, who chaired the event, emphasised the need to intensify efforts to derive maximum benefits from the tourists’ sites in the Region and called for renewed enthusiasm from Ghanaians for the development of the tourism sector in the country.

He commended the Executive Director of JTA for stepping up the game with the registration, establishment and eventually the launch of the JTA as an anchor for the tourism industry growth and pledged his support to every project and program that would be carried out by the organization to improve tourism in the region and the country as a whole.