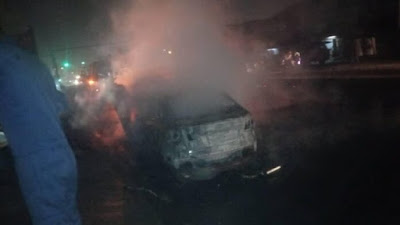 The owner of an unregistered KIA Saloon car narrowly escaped death after his vehicle caught fire in the middle of the road at the McCarthy Hill junction on the Kasoa-Accra highway.

The burning vehicle in the inner lane of the four lane highway, resulted in a heavy traffic jam on that stretch, causing fear and panic amongst motorists and commuters due to the intensity of the inferno.

It is unclear what caused the fire, but no casualties or injuries were recorded as the man quickly got out before the fire became intense.

The Fire Service later arrived at the scene more than 45 minutes after frantic efforts to reach them.

The vehicle had since been towed away immediately the fire was doused to clear the way for free flow of traffic.