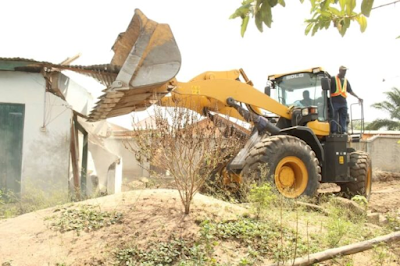 He warned developers and landlords, who have utilised such waterways and other unauthorised spaces for their benefits, to move before the task force dealt with them.

Mr Divine gave the warning when he led a demolition exercise in parts of Ho, including the encroached School of Hygiene main campus junction, to clear unauthorised structures within the area for easy access to the school campus.

The MCE expressed worry about the lack of access roads in the Municipality and that Assembly would do all it could to ensure that Ho remained a well-planned city with easy access to public places and facilities.

He commended Captain George Nfodjo (RTD), former District Chief Executive of Ho, for the wisdom of creating more access to public facilities in Ho more than two decades ago.

He said the exercise would be maintained, but it would be carried out with a human face and urged all trespassers to heed to the Assembly’s directive to relocate.

Some of the affected trespassers pleaded with the Assembly to give them more time to relocate.

The MCE said the Assembly would consider their plea and give them some time to get themselves ready and fully vacate the areas.

He disclosed that Ho was contending for a Metropolitan status, saying this exercise was a prelude to achieving that and urged all major actors to support his dream.

Mr Bosson said the exercise was not a witch-hunting or political vendetta but a collective assignment to make the enclave spatially planned for future generations.